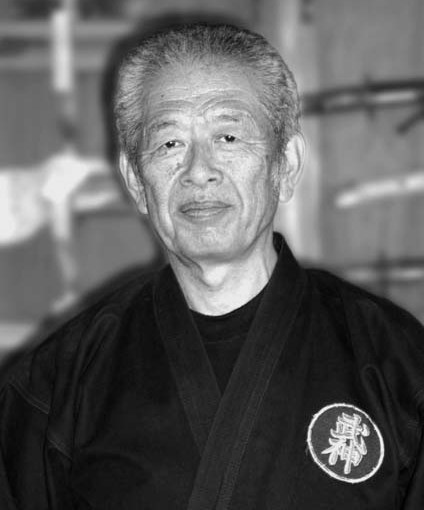 The Bujinkan (武神館) is an international martial arts organization based in Japan and headed by Masaaki Hatsumi. The combat system taught by this organization comprises nine separate Ryuha, or schools, which are collectively referred to as Bujinkan Budo Taijutsu.  The Bujinkan is most commonly associated with Ninjutsu, however Masaaki Hatsumi uses the term Budo (meaning martial way) as he says the Ryuha are descended from historical samurai schools that teach samurai martial tactics and ninjutsu schools that teach ninja tactics

Taijutsu (body combat art) is the Bujinkan system of unarmed defence using strikes, throws, holds, chokes and joint locks. It encompasses skill such as Koppo Jutsu, which is the way of attacking and/or using the skeletal structure, Koshi Jutsu, which is the way of attacking muscles and weak points on the body, Jutai Jutsu which is the relaxed body method, teaching throwing, grappling and choking techniques and Dakentai Jutsu which emphasises strikes, kicks and blocks

The first levels of training, such as leaping, tumbling, break fall techniques and body conditioning, form the basis for Taijutsu. They are needed to progress into other techniques such as unarmed combat and the use of tools and weapons.  Once learned, Taijutsu techniques can be applied to any situation, armed or unarmed

Almost all of the Ryuha in the Bujinkan are listed with their historical lineages in the Bugei Ryuha Daijiten (Encyclopaedia of Martial Art Schools, researched by Watatani Kiyoshi and Yamada Tadashi and first published in 1963) From 1968 onwards (4 years before Takamatsu’s death), the Bugei Ryuha Daijiten has had entries for Hatsumi below Takamatsu.

Several Bujinkan Ryuha were mentioned in the Kakutogi no Rekishi (History of Fighting Arts) although details are omitted, it states, “there are several schools that are well-known for being ‘effective arts’ (jitsuryoku ha)”.

Several of the samurai systems taught by Hatsumi such as Kuki Shinden Ryū Happo Bikenjutsu and Takagi Yoshin Ryū Jutai Jutsu have well documented lineages with different branches of these arts surviving under their own Soke. However, whilst the ninja’s activities are well documented, the nature of ninjutsu & the historical context means that there are no surviving written records of ninjutsu teachings prior to 1676.  As a result, some researchers assert that there is no way to independently verify the oral lineage included in the Togakure Ryu tradition.

In the Bugei Ryuha Daijiten the researchers list the full lineage for Togakure-ryū stating the following: “The succession is an oral tradition from Toda Shinryūken. Toda Shinryūken Masamitsu died in 1908 at the age of 90 years.  According to the lineage, Ikai originated the school, and in the Yowa period (1181-1182), it separated from Hakuun Doshi of Hakuun-ryū and became the Koga and Iga schools of ninjutsu.  The lineage passed through Momochi Sandayu and entered into the Natori-ryū of Kishu domain.  From the time of Toda Nobutsuna, the tradition was passed on to the Toda family.  This genealogy refers to dates and Kuden (orally transmitted stories/lessons) about people implying that these people were older than written records would suggest”.

The entry regarding Gyokko Ryu is as follows: “Receiving the tradition of Gyokko Ryu Shitojutsu from Sakagami Taro Kunishige of the Tenbun era, Toda Sakyo Ishinsai established Gyokko Ryu Koshi Jutsu as well as Koto Ryu Koppojutsu, passing them on to Momochi Sandayu, bringing them within the traditions of Iga Ryu Ninjutsu of Toda Shinryuken who lived during the end of the Tokugawa Shogunate (ended 1868). It is said that Toda Shinryuken passed away in the 14th year of the Meiji Emperor (1881) at the age of 90 years.” [25][26]

The entry regarding Koto Ryu is as follows: “The genesis of Koppojutsu is said to have been in ancient China. Koto Ryu was brought to our country by a Chan Bushou* of Korea, after this it was brought within the traditions of Iga Ryu Ninjutsu, and it’s revitalization in the Tenbun era is said to have been from Momochi Sandayu inheriting the tradition from Toda Sakyo Ishinsai (oral tradition from Toda Shinryuken).”