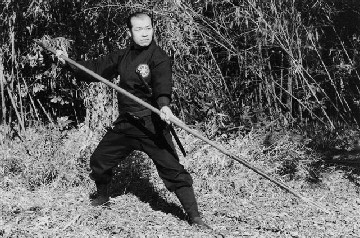 The Genbukan (玄武 館) is a traditional Japanese martial arts school, founded in 1984 by Shoto Tanemura, its current president. Genbukan means “the place where the martial artist is educated”.  The terms “Genbukan World Ninpo Bugei Federation”, its abbreviation “GWNBF” and “Genbukan” may be interchanged indifferently.  The GWNBF is an international organization whose action extends in more than one hundred dojos in the world.

Tanemura Soke is also head of three organizations operating under the Hombu Dojo Genbukan in Japan;

The Kokusai Jujutsu Renmei (KJJR), founded in 1991, which aims to transmit and preserve the authentic Japanese Jujutsu, as well as the Chinese martial arts related to jujutsu.

The Amatsu Tatara World Federation (ATWF), founded in 2006 to convey spiritual teaching to the source of Japanese martial and religious arts.

The Genbukan Ninpo Bugei (玄武 館 忍 法 武 芸) is divided into 36 categories known as ninja Sanjurokkei. The focus is mainly on Taijutsu, Bojutsu and Bikenjutsu, but also on Seishinteki Kyoho or spiritual development.  The study also includes, but is not limited to, Yumi, Naginata, Yari, Jutte, Kusari-Gama, Shuriken, etc.  Genbukan is accorded particular importance to salvation (rei ho), for greeting, etiquette and good manners have always been part of ancient customs.

The disciplines that constitute the Taijutsu of the Genbukan are: Daken Taijutsu, Ju Taijutsu, Koppo Jutsu, Kosshi Jutsu and Taihen Jutsu. The Daken Taijutsu consists of techniques of blocking and striking with fists, feet, elbows, etc.; the Ju Taijutsu on techniques of projections, keys and strangulations; Kosshi and Koppo Jutsu are techniques based on the art of pressure points and bone structure, among other things; finally, the Taihen Jutsu regroups all the techniques of movements and movements allowing to cancel or to escape an enemy attack.

The curriculum within the Genbukan Ninpo Bugei was developed from the following schools;