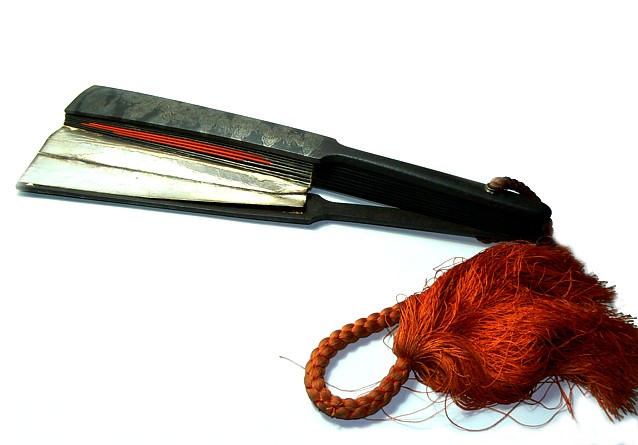 It’s based on the use of a solid iron fan or the folding iron fan, which usually had eight or ten wood or iron ribs.

The use of the war fan in combat is mentioned in early Japanese legends.

For example, Yoshitsune, a hero of Japanese legend, is said to have defeated an opponent named Benkei by parrying the blows of his opponent’s spear with an iron fan. This use of the iron fan was taught him by a mythological creature, a Tengu, who had also instructed him in the art of swordsmanship.
The practitioners of Tessen Jutsu could acquire a high level of skill.

Some became so skilled that they were able to defend themselves against an attacker wielding a sword, and even kill an opponent with a single blow. Like so many other Japanese arts of combat during this era, Tessen Jutsu reached a high level of sophistication.  For example, a famous swordsman in the late 16th century, Ganryu, was able to defeat several enemies with an iron fan.

Apart from using it in duels against enemies armed with swords and spears, the skilled wielder could also use it to fence and fend off knives and poisoned darts thrown at him.  Like a sword, the Tessen could be dual-wielded to parry with one hand and attack with the other.
Tessen Jutsu is still practiced by a few experts in Japan to this day.

Often regarded as an indoor weapon, it also has extremely practical uses outdoors.  Best suited to very close quarter fighting, a subtle and under-rated weapon.  A weapon which seems innocuous and innocent to the untrained eye, but can deliver strikes, holds, pins and strangles among many other applications.

The Tessen has the advantage of being a weapon that can be carried, where weapons are otherwise prohibited, either by security or etiquette.  For example, it would be very bad manners to take a weapon into someone’s house, however just because you’re not carrying a weapon does not mean you couldn’t be attacked by someone who is.

When you’re not wearing or carrying your sword, what else could you use to defend yourself?  In a country with high humidity, everyone would carry a fan; no-one would look twice at it.

At times the Tessen could also conceal a spike, or blade, making it even more lethal.

The one comment I often hear is; “How can something so small and innocent hurt so much and do so much damage?”  usually from a student with a look of shock, surprise and pain on their face.