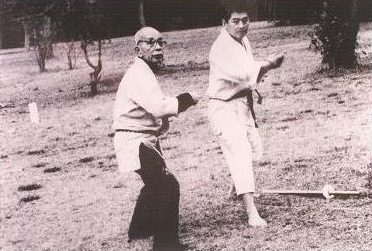 What is Ninpo Tai Jutsu?

Ninpo Tai Jutsu is a traditional Japanese martial art, often more commonly known by the term Ninjutsu, although this can be misleading.  Today Ninpo Tai Jutsu is a collection of nine old Martial Arts including several Ju Jutsu, Karate and Aikido schools, as well as specific schools of Ninjutsu.

So, what’s the difference between Ninpo Tai Jutsu and Ninjutsu?

In simplistic terms, in Ninpo Tai Jutsu we engage with an attacker and use techniques, punching, kicking, locking, holding etc. from with those schools to defeat an attacker.   For example;

The collective physical techniques are drawn from many Ryu Ha (traditional schools), each with a slightly different emphasis.

Daken Taijutsu includes striking and kicking methods that utilise the movement of the whole body to generate the maximum amount of power.

Kosshi Jutsu (pressure point methods) and Koppo Jutsu (breaking methods) involve attacking the weak points of the body in order to defend against a stronger attacker.

It’s widely accepted that the 6 schools of Ninpo Tai Jutsu are;

It’s widely accepted that the 3 schools of Ninjutsu are;

Ninjutsu is less about engaging with an attacker or enemy, it’s much more about a system used for the specific purpose of espionage and information gathering.  Direct confrontation was the last possible course of action.